‘We came together to sing’

Written by archive on December 6, 2021. Posted in lifestyle.

CRESTVIEW — Usually when singers from countywide school choruses come together at the same venue, it’s to perform in competition between schools. But at the Nov. 18 Super Men’s Chorus Day, the guys got together to make new friends and sing. 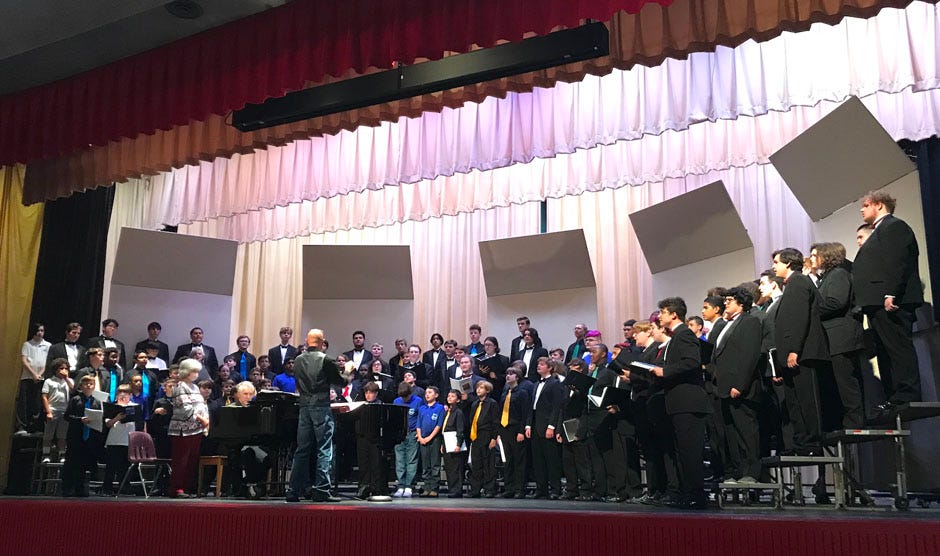 “We brought high schools and middle schools together — not competing but to sing together and to get to know each other,” said Crestview High School choral music director Kevin Lusk.

One of the reasons for organizing the annual Chorus Men’s Days is to get boys from the middle school choruses interested in continuing choral music in high school and beyond, Lusk said, noting that it is sometimes hard to get enough guys to complete high school-level men’s sections.

This year, Lusk and his counterparts throughout Okaloosa County schools decided they should all get together.

Starting at 9:30 a.m., choral music directors from those schools worked with the boys in small groups and ensembles throughout the day, culminating with a massed Men’s Day Choir mini concert in the Pearl Tyner Auditorium.

The concert’s six numbers were performed with virtuosity, with choral music directors Lusk, Christian Feazell of Ruckel, Catherine Feazell of Niceville and Suzanne Hartog of Davidson alternating directing the boys.

With boys ranging from little guys who needed extra effort to climb the risers to seniors in high school, the resultant quality of the concert pieces was doubly impressive, especially considering none of the chorus’ members had performed as one group before. In addition, the range of maturity offered some extra sound not always prevalent among older male student choruses.

The evening concert began with Roger Emerson’s arrangement of John Denver’s “Take Me Home Country Roads,” which the guys handled with pleasing aplomb. On Neil Diamond’s “Sweet Caroline,” the singers had a lot of fun emphasizing the signature “bum, bum, bums.”

“They did that themselves,” Lusk said, smiling.

“Courage Lives!” is a dramatic and uplifting song written in 2006 for middle and high school singers for the Texas Choral Directors Association. It let all of the boys unleash their bravado as they sang about the character traits of courage and bravery.

Traditional numbers including “She’ll Be Comin’ Round the Mountain” and “Will the Circle Be Unbroken” offered the guys a chance to explore American traditional music, while “The Wellerman” introduced many in the chorus to New Zealand’s folk music.

While the audience left appreciative of the singers’ talents and those of their choral music teachers, it was the kids themselves who benefited most from a day of choral singing and making new friends from other schools.

“We had a great time,” Lusk said. “We came together to sing and that’s what we did.”

This article originally appeared on Crestview News Bulletin: ‘We came together to sing’