Written by archive on February 17, 2012. Posted in lifestyle. 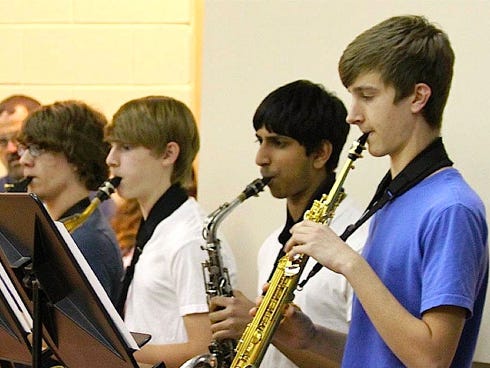 CRESTVIEW — The legendary sax player Charlie Parker once famously said, “Don't play the saxophone. Let it play you.” A fledgling group of Crestview’s finest young sax players have gotten together and are putting The Bird’s wisdom to the test.

Calling themselves Sax to the Max, the quartet of Crestview High musicians makes its Music at the Library debut Monday evening at the Crestview Public Library from 6 to 8 p.m.

“This time we’re going to be playing some Christmas songs,” the group’s leader, Nick Overton, said. “A lot of what we have — and I’m still gathering stuff right now— is some popular movie themes, and I have some classical stuff, and a bunch of jazz.”

Composed of Nick and his fellow Crestview High School band saxophonists Vishnu Sriram, Coltin Fortner and Nick Watson, Sax to the Max got together about two years ago.

“I just saw some sax groups performing and I thought it was interesting,” Nick said. “I looked up some videos on YouTube and said, ‘That looks interesting,’ so I got some music and we got together.”

The group has only recently started performing in public. They expect to start appearing this month at the Java Journey Connection coffeehouse on Main Street, and are seeking opportunities to entertain dinner patrons at area restaurants. They’ll also be at the library every second Monday through May 2013.

Meanwhile, three of Sax to the Max’s members recently got selected to appear in the All-County Band. Nick Overton, Vishnu and Coltin will perform with their peers from throughout Okaloosa County (including 24 members of the Big Red Machine) at the Mattie Kelly Arts Center at Northwest Florida State College at 7 p.m. on Feb. 1.

Hear Sax to the Max do some wailin’ of their own Monday evening at the library. The music’s free — but musicians’ tip jars never argue if someone wants to drop a couple bucks in if they like what they hear.