Written by archive on September 19, 2012. Posted in lifestyle. 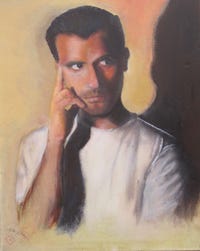 CRESTVIEW — The world, as interpreted by painter Rita Benz, unfolds on Crestview Public Library’s north exhibition wall, and it’s an enjoyable, interesting look at subjects ranging from fascinating world locations to nature at its most glorious to people in various frames of mind.

The subjects’ diversity makes the exhibit, which will be up until the end of October, particularly intriguing. I found her paintings of individuals especially captivating. Now and then, an artist exhibits works that force the viewer to pause and contemplate. Several of Benz’s people portraits do just that.

What was going on that captured that child’s interest in the flickering candle in “Mesmerized”? What is behind the young man in the T-shirt’s pensive look in “Intensity”?And what’s the story behind the sobering image of a youth in a hoodie in a cold wintery park in a painting called “Lost Soul,” a title that only increases the enigma?

These and Benz’s other people paintings fill the viewer with curiosity, empathy and even compassion, drawing you back after you’ve admired works such as her lively, colorful flowers and the delightful flitting butterflies in “Monarch.”

As an art lover infected with wanderlust, I likewise appreciated Benz’s series of travel paintings from Rome. The simplicity of the artist’s style leaves it up to the viewer to imagine the splash of the “Vatican Fountain” or the burble of the Tiber River as it flows through the Eternal City.

How an artist views his or her world on canvas, or in other media, also offers the viewer a glimpse into the artist’s soul.

Step into Rita Benz’s world — and, perhaps, peer into her soul — at the Crestview Public Library.