Mountain dulcimer group performs during Music at the Library

Written by archive on September 12, 2012. Posted in lifestyle. 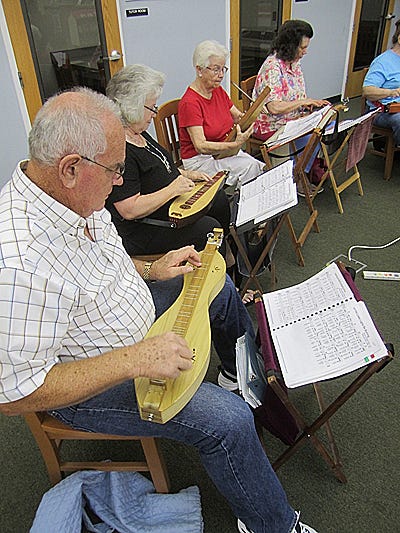 CRESTVIEW — Since the Crestview Public Library inaugurated its Music at the Library series a couple of years ago — shattering the stereotype of hair-bunned librarians in cat-eye glasses shushing patrons —two particular acts have returned for multiple encores. In addition to guitarist Rick Sanders, the Niceville Noodlers delight library users repeatedly.

The dulcimer players happily pluck and strum the native Appalachian instrument from a semi-circle generally seated near the tutoring rooms in the front of the library. Their leader, Omar Wiseman, sits in the center.

Crestview member Dr. Ned Couey, who also belongs to the Crestview Community Chorders, a local dulcimer group, said that, for many players of the instrument, a major appeal is its simplicity.

“It’s a pretty simple mountain instrument,” Couey said. “We play the mountain dulcimer. It’s a relatively simple string instrument to play. You can get pretty good at it pretty fast. People can even play along with fiddles because you can play that fast.”

The dulcimer originated among Scots and Irish immigrants in the Appalachian Mountains early in the 19th century. It features a graceful curved body and anywhere from two to 12 strings, but averages three to four. The strings are generally plucked or strummed as the instrument is held in the musician’s lap, but some versions can be played with a bow.

“It just has a beautiful sound to it,” Couey said. “I really enjoy it myself.”

The Niceville Noodlers will next perform at the Crestview Library on Sept. 18 from 6-8 p.m.