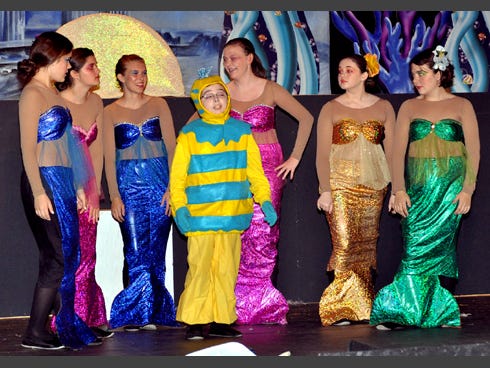 CRESTVIEW — The curtain on "The Little Mermaid” rises this week at the region’s premiere children’s theatre.

Plunge "Under the Sea" when the Florida Chautauqua Theatre brings the classic story to life in the 2008 Walt Disney stage version of the studio's 1989 animated film.

All the memorable Alan Menken and Howard Ashman Academy Award-winning songs that audiences loved in the film — including "Kiss the Girl," "Under the Sea” and "Part of Your World” — are in the stage musical.

Several more songs were penned for the stage version, which Disney's theatrical branch hoped would be the next "Lion King." While the latter wows Broadway audiences after more than 15 years, "Mermaid" ran less than two years.

This time, director Beth Campbell-Work will populate the former downtown DeFuniak Springs cinema stage with 42 young thespians, some as young as 5 years old.

Many of the student actors will perform "The Little Mermaid" as the culmination of a semester of study in the Music and More theatre workshops program.