Every time we have a dry period in spring or summer, I get those predictable calls about some mysterious pest that's playing havoc in lawns.

Without realizing it, the caller usually describes a textbook example of dry spots in a lawn. And many times that’s what the problem areas are – dry spots. 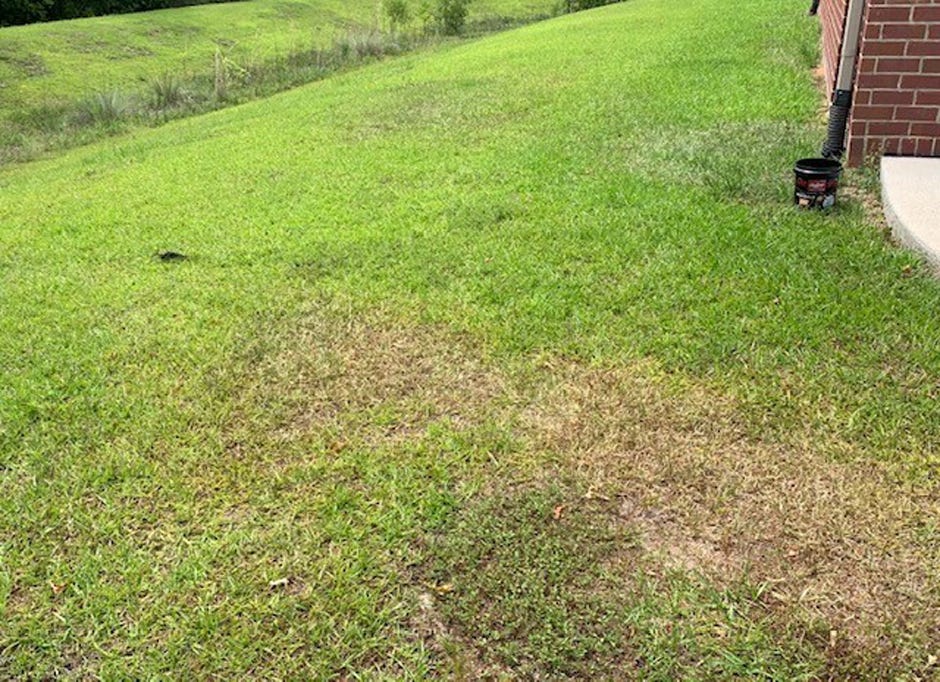 Possible imperfections are many. The homeowner may easily fix some irrigation system problems, while other problems may require the expertise of a licensed irrigation contractor.

There may be too few sprinkler heads for adequate coverage, insufficient pressure to operate each zone, incorrect choice of nozzles or wrongly mixing rotors with spray heads on the same zone. The cause for dry spots may be as simple as a maladjusted spray head, a broken spray head, a plugged nozzle, a tree or shrub blocking the water, grass that has grown over a pop-up spray head, etc.

Regardless of the cause, there are a couple of simple tests that can help confirm that the problem areas are to be blamed on lack of sufficient water instead of a mysterious pest.

First, check the affected areas by taking a soil sample in the root zone. Use a soil probe or shovel to remove a core of soil to a depth of 6 to 8 inches. Visually inspect and feel the soil sample for moisture. Do the same test in an area of the lawn that looks normal and compare the difference. It should be obvious if there is a difference in moisture between the areas tested.

The second test involves placing several empty straight-sided cans such as tuna fish cans in the affected area and several in a "normal" area of the lawn. Then let the irrigation system run long enough to collect some water in the cans. Compare the amount of water collected in the two areas. It should be obvious if there is a difference in the amount of water applied in the areas tested.

These tests are cheaper, less trouble and more environmentally friendly as compared to purchasing and applying pesticides for nonexistent pests as a result of incorrectly diagnosing the problem.

If these tests do not identify the problem as lack of water, you may have a lawn pest. But don't guess.

Occasionally inspect your irrigation system while it's running for obvious, easily corrected problems such as a maladjusted or broken spray head.

The University of Florida Institute of Food and Agricultural Sciences publications listed at https://edis.ifas.ufl.edu/entity/topic/residential_sprinkler_systems will help with your inspection.