Treefrog calls are often heard with each rain event, but how about a “snoring raspy” call that begins after a day time light rain?

That may be a male Cuban treefrog trying to attract the girls. Cuban treefrogs breed predominately in the spring and summer. Reproduction is largely stimulated by rainfall, especially warm summer rains such as those associated with tropical weather systems and intense thunderstorms. 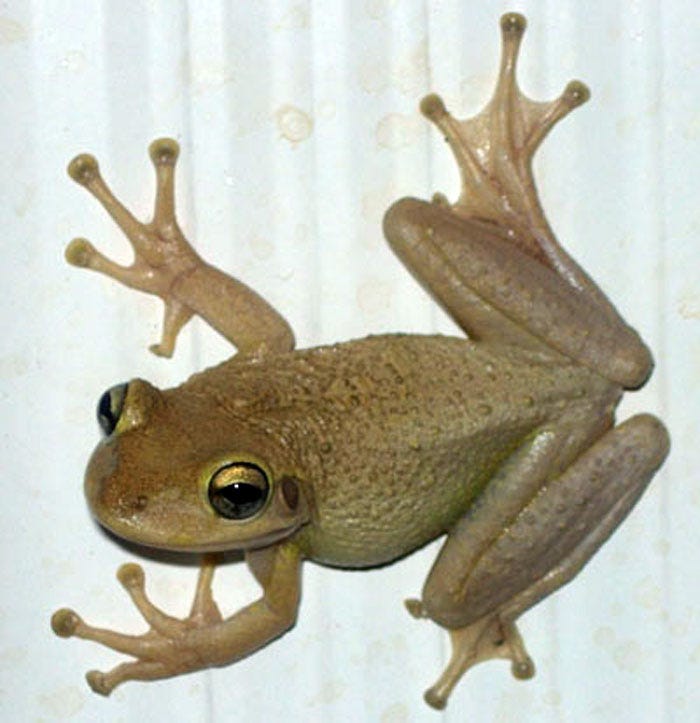 The Cuban treefrog (Osteopilus septentrionalis) was accidentally introduced to Florida in the 1920s as a stowaway in shipping crates from the Caribbean. Over the last 100 years, the invasive frog has managed to spread throughout Florida and the Southeastern U.S. by hitchhiking on ornamental plants, motorized vehicles and boats.

Though occasional cold winters have created temporary population setbacks, new generations of Cuban treefrogs continue to be reported in north Florida, including the Panhandle. 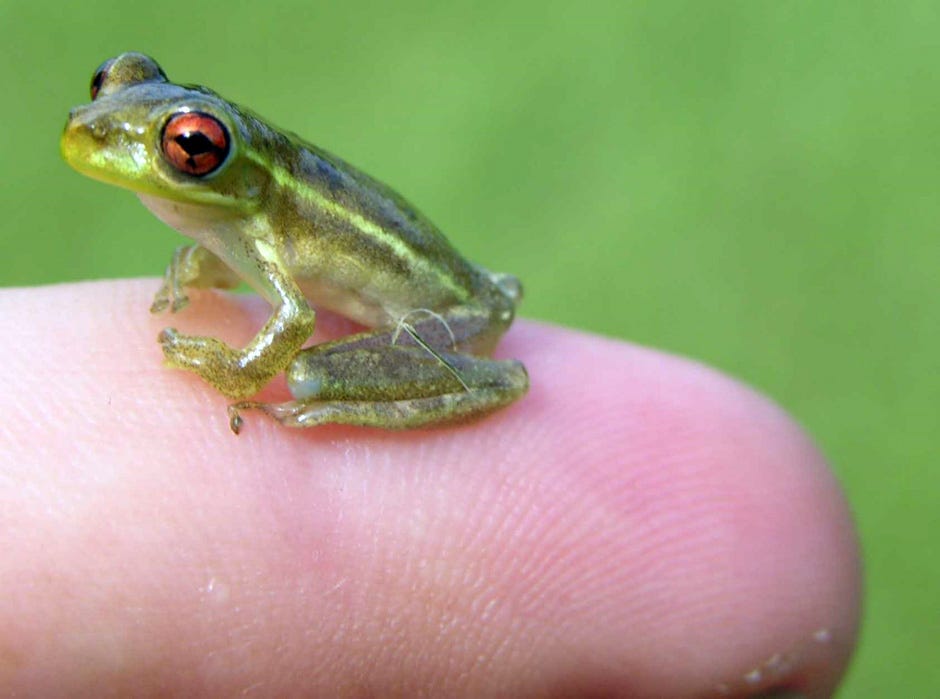 An invasive species is generally defined as a plant, animal or microbe that is found outside of its native range, where it negatively impacts the ecology, economy or quality of human life.

Cuban treefrogs come out at night to feed on snails, millipedes, spiders and a vast array of insects. But, they are also predators of several Florida native frogs, lizards and snakes.

Tadpoles of the invasive Cuban treefrog have been shown to inhibit the growth and development of native Southern toad and green treefrog tadpoles when all of the species are in the same water body. Additionally, a large female Cuban treefrog can lay over 10,000 eggs per season in very small amounts of water.

Cuban treefrogs may exceed 6 inches in length, have warty-looking skin with possible blotches, bands or stripes, and vary greatly in color. 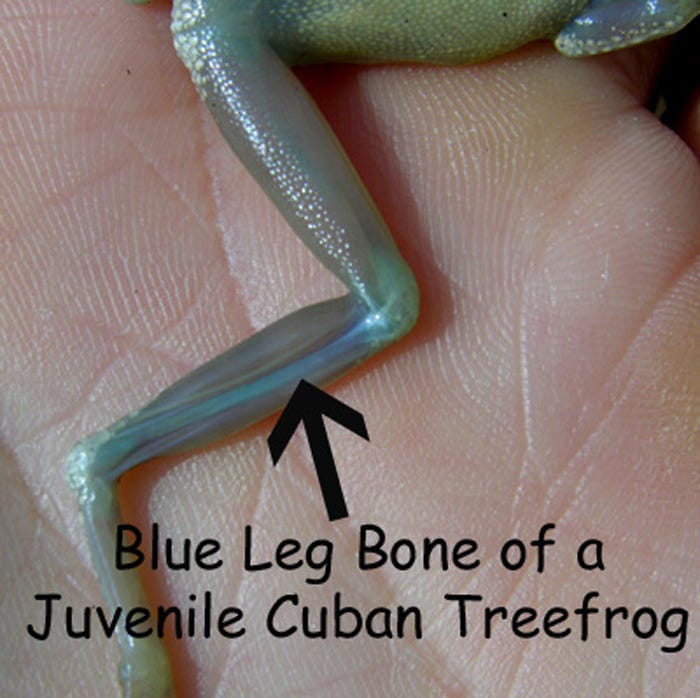 The skin of the Cuban treefrog produces a sticky secretion that can cause a burning or itching sensation if it contacts the eyes or nose of certain individuals. It is recommended to wear gloves and wash your hands after handling Cuban treefrogs.

It is important to document the locations of Cuban treefrogs in the Panhandle. Placing short sections of PVC pipe in the ground around your home and garden will provide hiding places for the treefrogs that enables you to monitor them.

Cut 10-foot sections of 1.5-inch-diameter PVC pipe into approximately three-foot-long sections and push them into the ground about 3-4 inches.

To remove a frog from a pipe, place a clear sandwich bag over the top end, pull the pipe from the ground, and insert a dowel rod in the other end to scare the frog into the baggie. 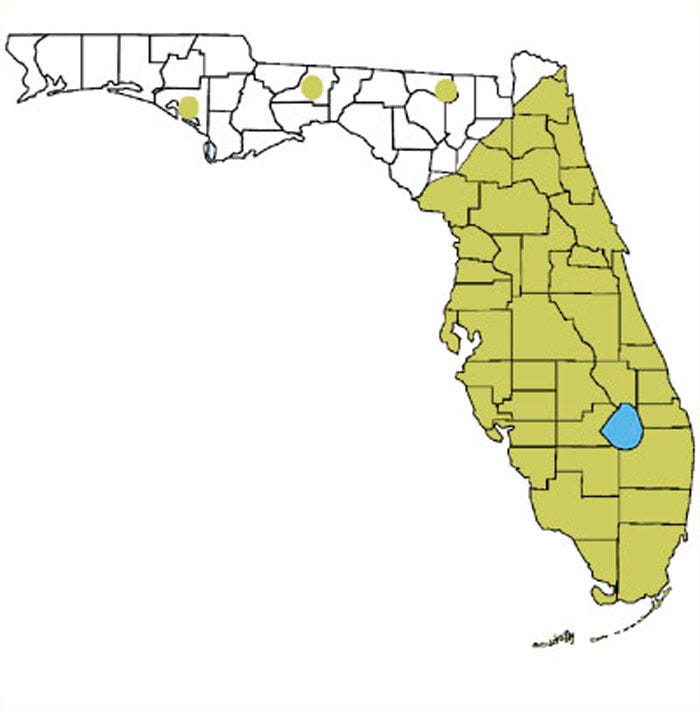 If you suspect you have seen one, take a picture and send it to Dr. Steve Johnson at tadpole@ufl.edu. Include your name, date, and location. Dr. Johnson can verify the identity.

If it is a Cuban treefrog, upload the information by going to www.eddmaps.org/ and click the “Report Sightings” tab.

Once identified as a Cuban treefrog, it should be euthanized humanly. To do that, the Cuban treefrog in a plastic sandwich bag can be placed into the refrigerator for 3-4 hours then transferred to the freezer for an additional 24 hours.

Alternatively, a 1-inch stripe benzocaine-containing ointment (like Orajel) to the frog’s back to chemically anesthetize it before placing it into a freezer. After freezing, remove the bagged frog from the freezer and dispose of in the trash.

Ornamental ponds should also be monitored for Cuban treefrog egg masses especially after a heavy rain. The morning after a rain, use a small-mesh aquarium net to scoop out masses of eggs floating on the surface of the pond and simply discard them on the ground to dry out.

Various objects that can collect water found throughout your yard need to be dumped out regularly to reduce breeding spots for both Cuban treefrogs and mosquitoes. 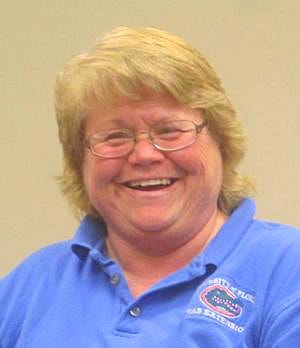 Sheila Dunning is an agent at the University of Florida's Institute of Food and Agricultural Sciences Extension office in Crestview.