Written by archive on October 23, 2012. Posted in lifestyle. 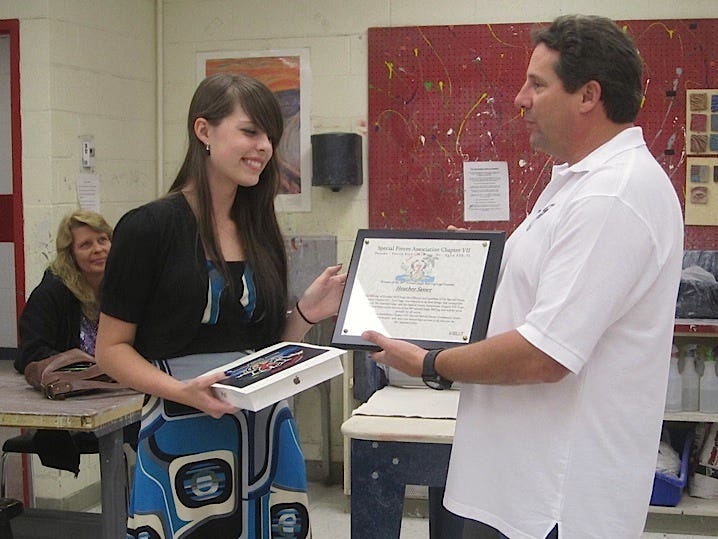 CRESTVIEW — Take a brace of dolphins, add a festively decorated palm tree, a splash of gulf water and the insignia of the 7th Special Forces Group (Airborne) and you’ve got a first-place winning T-shirt design for this year’s Jingle Bell Jog.

Steve Tuttle, race director for the 34th annual Jingle Bell Jog 10K race and 5K fun run, said, “What Heather did was design the logo for this year’s shirts,” Tuttle said. “We wanted to involve the community in the design. Niceville (High School) had some good entries and Fort Walton Beach has some good ones, but Crestview beat them out.”

As Heather’s parents, Terri and Mike Sasser beamed, Tuttle and Mark Patry also presented her with a certificate of appreciation, a Green Berets T-shirt and a 7th Special Forces Group unit crest decal.

Last year, about 1,200 people participated in the Jingle Bell Jog, Tuttle said. He expects more than 2,000 participants for this year’s event, which begins at 8 a.m. Dec. 8 at Uptown Station in Fort Walton Beach.

Heather expressed her appreciation for the recognition, and added gratitude for her teacher and parents’ support.

“Thank you, Ms. Breaux, for inspiring me, and thank you, Mom and Dad, for always being there for me,” she said.