Written by archive on November 6, 2012. Posted in lifestyle. 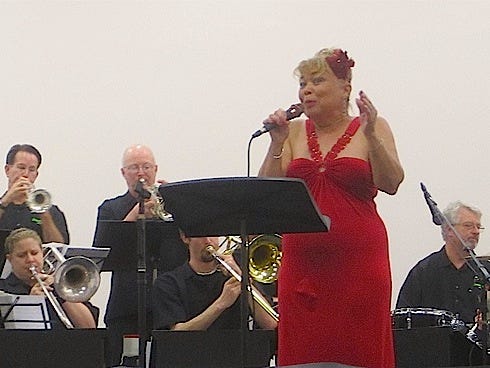 Like the north county weather’s unpredictability in autumn, the sounds in Warriors Hall Nov. 3 changed back and forth from hot and sultry to cool and breezy as the DownBeat Jazz Orchestra unleashed some of the greatest big band and jazz music to swing the Hub City. The Crestview Friends of the Arts brought the 17-piece band to the Warriors Hall stage to celebrate the first anniversary of the hall’s new grand piano.

The audience, which topped 200 jazz lovers, ranged from seniors with canes to a pair of 6-year-old twins who knew good sounds when they heard them, proving that all-American jazz transcends generations.

A boisterously hard-pumping arrangement of Duke Ellington’s “Take the A Train” kicked off the evening, followed by numbers showcasing the orchestra’s multi-faceted vocalist Gina Walker, whose tight vocals demonstrated ear-pleasing control but also let her cut loose when the material — or mood — demanded. Her warm, heartfelt rendition of the Brothers Gershwin’s “Summertime” from “Porgy and Bess” was breathtaking.

Saundra Daggs, a guest vocalist, thrilled the audience with her rendition of Cole Porter’s complicated masterpiece “Night and Day,” followed by the perky “Mambo Italiano” before slowing things down with a soulful “This Masquerade.”

The songs reeled off one after the other, with the DownBeat guys, Gina and Saundra molding Hit Parade standards into fresh, exciting pieces all their own.

“This band plays stuff we like to play,” music director — and Gina’s husband — Michael Walker said. “We try to be more audience-sensitive, but when we got together, we said we’d play the stuff we didn’t get to play in high school.”

During many numbers, couples, often led by the Crestview Fred Astaire studio’s David Colón, Erika Moreno and Aaron Stowell, cut the rug. Unable to restrain their happy feet, three of Brent and Julie Bywater’s four children took to the floor and remained fixtures down front for the rest of the evening.

While 6-year-old twins Rex and Sydney’s dancing might charitably be described as “athletic,” Trevor, 8, whom Mom Julie said was “channeling his inner Gene Kelly,” whose movies are among Trevor’s favorites, displayed his “juke” dancing.

“When you juke, you’re able to do stuff real fast,” Trevor said, explaining the Chicago-born sideslip moves. “You can do a lot with your feet.”

“I enjoy seeing the children dancing, especially to this kind of music,” Gina said. “Our parents motivated us to (enjoy) big band music and it’s just so important, it doesn’t die for today’s kids.”

Some, however, found the children’s exuberance distracting.

“It was cute at first,” Pamela Tousserchamp said. “But after a while, all that running around got to be annoying.”

The evening’s second half kicked off with a spirited version of “In the Mood.” Gina led the band into a great version of “Straighten Up and Fly Right” that contrasted — nicely — with Nat King Cole’s original, and an emotionally satisfying rendition of “At Last,” made famous by Etta James, that sent chills up many a spine.

The band cut loose with a fantastic instrumental medley of several Leonard Bernstein songs from “West Side Story.” Like good little Jets and Sharks, the Bywater kids danced throughout. Daggs returned for a lovely “Why Don’t You Do Right” and “a little ballad,” “The Nearness of You.”

The night’s last Cole Porter tune was the usually sultry “Love for Sale,” which the guys re-imagined with a jazzy, swingin’ beat. But they saved us a good torch song for the finale, with Gina’s slow, sad, glorious rendition of “Traveling Light.”

It was a memorable evening, an event proving Crestview needs and desires accessible timeless music that thrills the ear, nudges the heart and stirs the feet, whether they’re Erika Moreno’s elegant pumps or Rex Bywater’s sneakers with flashing red LEDs in the soles.