COMMENTARY: James Bond and me

Written by archive on November 9, 2012. Posted in lifestyle. 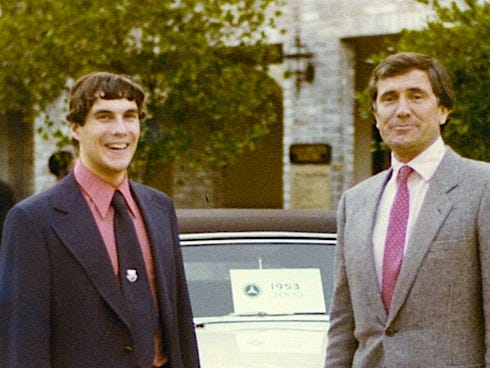 I didn’t mean to be a James Bond enthusiast. I never thought I’d drop quotes from 007 films in conversation with fellow enthusiasts, or have one-sheets from Bond films on the wall of my office, or make a mix of dinner music from Bond film soundtracks to play when we have guests to supper.

Lately I've been driving my colleagues Bond-crazy, playing the soundtrack albums, redecorating the men's bathroom with vintage 007 film lobby cards, browbeating our poor editor, Thomas Boni, until he'd let me run a James Bond trivia contest in the paper. But hey, a new Bond film only comes along every two or three years. I've got my tickets for "SkyFall" already.

Maybe it’s my parents’ fault. They gave me an Airfix model of James Bond’s Aston Martin DB5, complete with functioning gadgets, for my 10th birthday. (I made a horrible muddle of it, starting with accidentally gluing down the ejector seat. If I had just left it in the box untouched, it’d be worth a fortune today.)

Mom inadvertently got me reading the original Ian Fleming novels when she gave me money to buy a German-English dictionary for my high school language class. There was a display of the film edition of “Diamonds Are Forever” by the front door of the bookshop and I bought that instead.

The first 007 film I ever saw was “Thunderball,” Sean Connery’s 1964 fourth outing as 007, which was broadcast by CBS-TV. (I still have the page from TV Guide in which it’s listed.) I started collecting the soundtrack albums, slipping my high school art teacher, Ms. Miles, cash from my job at the A&P to buy them when she’d go to the mall.

And then came college. Tulane University had one of the nation’s foremost student-run film boards, and was one of a handful of campuses across the country with 35mm projection capabilities and Dolby stereo sound. Perfect for, say, organizing a marathon showing of every Bond film in one weekend, which I did. (We even borrowed a Lotus Turbo Esprit from a local dealer to park in front of McAlister Auditorium.)

Rereading John Pearson’s “James Bond: The Authorized Biography of 007” my junior year, I discovered Bond’s birthday (Nov. 11) fell on a Saturday. A birthday party was in order. Invitations were sent out and about 25 friends crammed into my residence hall suite, appropriately festooned with Bond film posters.

I received a telegram from Albert R. Broccoli, the Bond film producer, expressing his regrets he and his crew couldn’t be in “wonderful New Orleans again” (they had shot “Live and Let Die” there in 1971) but wishing us a great evening. And we made Nell Nolan’s coveted social column in the Times-Picayune, right up there with all the snooty Uptown soirées.

Subsequent James Bond Birthday Parties grew in scope. George Lazenby, whose one appearance as 007 in “On Her Majesty’s Secret Service” made him an instant Trivial Pursuit question, appeared at one. So did Lois Maxwell, the original Miss Moneypenny, whom we took to Audubon Zoo during her visit, where she bought us hotdogs and ice cream. Two were held aboard streetcars chugging along St. Charles Avenue.

I’d like to think this Bond thing’s an innocent obsession, rather like collecting shot glasses or Bing & Grondahl Christmas plates. I’ve got tubes full of Bond film posters, editions of the novels in multiple languages (including Icelandic), 007 toys and games, and am hoping Santa brings me the new Blu-ray set of the all the movies.

But my interest in the character goes beyond the Aston Martins, Saville Row suits, Rolex watches and winsome lady friends. I suspect it has to do with Bond’s embodiment of the sort of quiet, no-nonsense hero who knows his duty and does it without much hoopla, sometimes getting his heart and body injured in the process.

Bond reminds me of men from the Great Generation, such as my dad, who marched off to World War II, as did Bond, recognizing it was their duty, not expecting any glory. Actually, someone expressed this better.

“He’s our modern-day version of the great heroes who appeared from time to time throughout history;…People who all went out and put their lives on the line for the cause of good,” President Ronald Reagan said in a 1983 Bond TV special. “James Bond is a man of honor. Maybe it sounds old-fashioned, but I believe he is a symbol of real value to the free world.”

Isn’t that the sort of hero we — and our kids — should be looking up to? Sometimes it seems there aren’t many left. But as long as one can walk up and say, “My name is Bond. James Bond,” there’s hope for the world.

Favorite Bond dialogue: Bond: “You expect me talk?” Goldfinger: “No, Mr. Bond, I expect you to die.”

This article originally appeared on Crestview News Bulletin: COMMENTARY: James Bond and me