Written by archive on October 26, 2012. Posted in lifestyle. 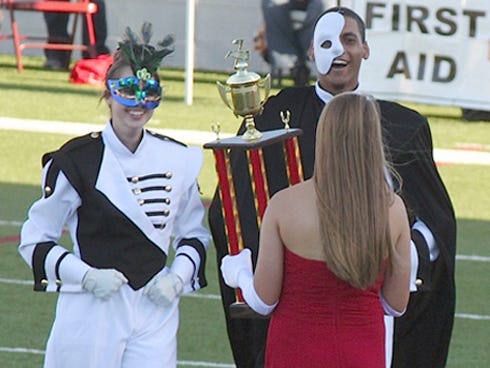 CRESTVIEW — After the Crestview High School band marched away with multiple trophies at the Battle of the Border band competition in Valdosta, Ga., folks throughout the tri-state area learned what the 280-piece band’s north Okaloosa County fans already knew: The Big Red Machine’s a winner.

“The Big Red Machine scored high by receiving straight superior ratings,” she said. “In the preliminary round, we took first place in our class, first place for our division and qualified for the finals that evening.

“They went to Wild Adventures (an amusement park) after the competition,” Cadenhead said. “There was certainly steam to release because there was a lot of pressure. There were 18 bands during the preliminary and the finals came down to eight bands.”

The Big Red Machine figures prominently in her family, Cadenhead said. Her sister was in the band’s color guard; her brother, Carmine Harrell, is the band’s current assistant drum major; and she’s a fan of the organization herself.

“I’ve been to every Friday Night Lights and almost every away game over the past six years,” she said.

Cadenhead said if fans still have not seen the band’s show woven around Sir Andrew Lloyd Webber’s musical, “The Phantom of the Opera,” there is one more opportunity.

“The cadence and the visual effect (fill) you with admiration for the talent portrayed by our young performers,” she said.

“This is the last CHS football game and the last Big Red Machine performance for the year.”