Written by archive on January 8, 2020. Posted in special. 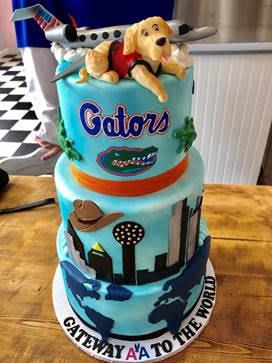 Gainesville Regional Airport’s cake that celebrated the opening of routes from Gainesville to Dallas has won the Anna Aero Magazine’s 2019 “Cake of the Year” contest.

The cake won over 11 over international competitors in the public-vote contest.

Newberry bakery “Sugar, Refined” created the confection, which featured almond and chocolate sheet cake covered in sky blue fondant. The airport’s dog, Beamer, was featured along with an American Airlines jet floating on a cloud. The cake featured Florida Gators and Dallas Cowboys’ imagery and the world.

Direct flights to Dallas/Fort Worth International Airport from Gainesville began in March.