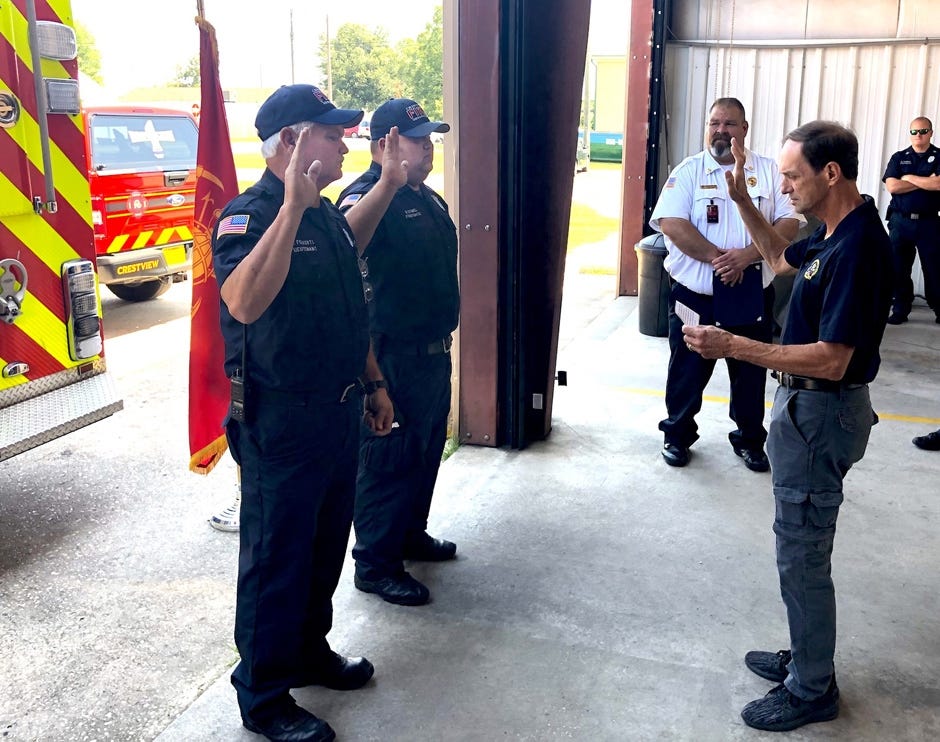 CRESTVIEW — Two firefighters with a combined 24 years of Crestview firefighting experience between them were promoted July 31 to officer ranks and assigned new duties in the Crestview Fire Department.

Noting the department prides itself on promoting from within, the agency’s spokesman, Capt. Corey Winkler, said the knowledge and expertise newly promoted Capt. Dennis Folkerts and Lt. Nicholas Stowell bring to their new positions will be invaluable assets for the citizens of Crestview.

Folkerts brings 13 years of Crestview experience to his position, while Stowell has been with CFD for 11 years.

“Fellow firefighters were on hand to support and welcome the newly promoted officers as they were ‘pinned’ with collar pins that represent their new rank,” Winkler said.

Both officers will be assigned to A-shift to fill recent vacancies. Folkerts will serve at Station 3 on Brookmeade Avenue, where he will manage one of the station’s fire crews. Lt. Stowell will serve at Station 1, the main firehouse on Woodruff Avenue, as driver and operator of various firefighting apparatuses.

City manager Tim Bolduc, who was in attendance as Mayor JB Whitten swore the officers to their new ranks, said he admired the dedication and service Folkerts and Stowell have provided to the people of Crestview.

“These are hardworking, top professionals, and I am proud to see their efforts recognized with their promotions,” Bolduc said.

“We wish Captain Folkerts and Lieutenant Stowell the best of luck in their new positions,” Winkler said. “Our organization looks forward to their leadership as it moves forward.”

Even as the new officers were being sworn in, three rookie Crestview firefighters began training and evaluation as they entered their one-year probation period.